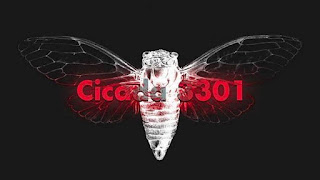 A mysterious enigmatic organization so called ‘ Cicada 3301 ’posted three sets of cryptographic internet puzzles between the year 2012 and 2014.

What were they trying to accomplish with those puzzles? Let’s keep reading to figure it out. 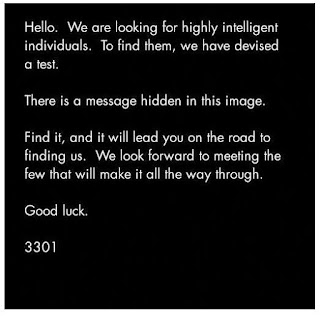 The anonymous author went by the four digit name 3301, who challenged the users to find a hidden message behind the post. Those who stumbled acrossed the image had no idea that someone had just set in motion one of the most elaborated scavenger hunt the internet has ever seen.

Within minutes of the image being posted, someone discovered that by opening the file using a text editor an appended string of readable text could be found. The string contained a cipher that, once deciphered, formed a link to yet another image. This appeared to a dead end at first but by using an application known as outguests, users were able to extract hidden information embedded within the first image.

The extracted hidden information lead to a subreddit which turned out to be containing information about a book. The book along with a code could then be used to uncover a phone number, that, when called played a this pre-recorded message, “Very good, you’ve done well. There are three prime numbers associated with the Final.JPG image, 3301 is one of them. You will have to find the other two. Multiply all of these three numbers together and add a .com at end to find the next step. Good luck. Good bye. ”

By the end of the following day, the first image had been reposted all over the internet. A community of detectives sought to unravel this elaborate puzzle but no one was quite sure what to make off it. What was the puzzle for ? Who was behind it? What happens when you reach the end ?

Some naturally dismissed it as an elaborate joke while others perceived its complexity as evidence against it being the work of a mere troll. Before long, rumors began to circulate that this could be the work of some secret society or an intelligence agency with the intent of recruiting individuals proficient in cryptography, steganography and other related fields.

Of course, it was nothing just a rumor.

The two missing numbers mentioned in the recording proved to be the dimensions(i.e. 509 & 503) of the original image that was posted initially. After multiplying the width and height with 3301

and using the product as a web address, users were taken to a website.

The website consisted of a countdown as well as an image of a cicada. When the countdown reached zero, the page was updated with a list of co-ordinates. The co-ordinates pointed to location around the globe, 14 locations in 5 different countries. It was now up to participants living near the specified co-ordinates to rise from their comfortable armchairs and venture outside.

Those who believed Cicada to be the work of an organization now felt their beliefs had been justified. In their opinion, only some international collective possessed the means and resources to create a scavenger hunt of this magnitude. This was not the work of an average troll. No, this had to be something else. At each location was a poster with the Cicada symbol and a QR code. The codes linked to an image, the image contained a riddle, the riddle lead to a book.

And the book lead to a website. But here the puzzle took an unexpected turn. Only a select group of first arrivals to this website were accepted into the final stage of the puzzle. The site eventually closed down with the message, “ We want the best, not the followers.”

The finalists were also warned not to collaborate with others nor to share the details of this private stage of the puzzle. Well given that we know this, it’s safe to say that not everyone heeded that warning. But those who did presumably advanced through the final stages before reaching the very end of the puzzle.

After nearly a month of silence an image appeared on the subreddit announcing the conclusion of the puzzle and just like that the hunt was over. 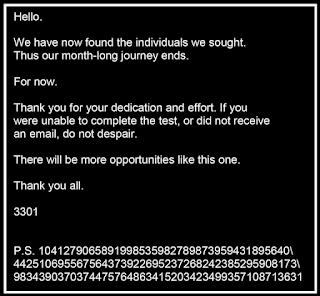 Cicada had supposedly found the “highly intelligent individuals” they were looking for and whatever ever happened to them is a bit more of a mystery.

The lack of an explanation was perceived by many as confirmation that the puzzle had been nothing but a wild goose chase intent on wasting everyones time. After all questions raised by the original image remained unanswered. What was the puzzle for ? Who was behind it ? What happens when you reach the end ?

However, as it later turned out this was only the beginning. Whomever was behind this intricate game had the foresight to include an authentication code known as an PGP signature along with every clue. This allowed the users to verify that an image or message was actually from Cicada as opposed to some impostor seeking to derail or hijack the puzzle. Cicada had repeatedly warned of such “false paths” and insisted that any message lacking a valid PGP signature should promptly be disregarded.

After a year of lackluster imitations this image finally matched the official PGP signature.

Cicada was back and it was time for round two. The second puzzle was not too dissimilar from the first. The image enclosed a message, the message lead to a book, the book produced a link and gradually the puzzle unfolded. At one point l, a recording titled The Instar Emergence was uncovered

Another clue lead to a cryptic twitter account which then lead to an image. The image proved vital to the progression of the puzzle but the inclusion of this runic alphabet would remain a mystery for quite sometime. Much like the first puzzle the second swelled into the physical world when a list of coordinates compels participants to once again take to the streets in search of enigmatic posters. This time it was 8 locations in 4 different countries. But eventually the trail went cold once again. Another select group of first arrivals had been accepted into a final private stage of the puzzle. Unlike the first puzzle the second did not conclude with an official message from Cicada. The trail went cold and Cicada vanished once more leaving us no close to an explanation. However this was still not the end.

At the beginning of 2014 it was turn for round three. Once again the image enclosed a message, the message lead to a book, the book produced a link, and suffice to say it was more of the same. Except, this time the puzzle seemed to revolve around a strange book. The book was titled Liber Primus, meaning first book in Latin, and was evidently written by Cicada. The runic alphabet uncovered in 2013 finally made sense a the book was primarily written in runes. Even so the meaning of the translated pages were cryptic at best. The book consisted of various philosophical and ideological ideas and appeared to be their manifesto. Many have since compared the strange writings to that of a cult. A page lead to a website containing yet another recording titled Interconnectedness. However, a significant portion of the book has yet to be translated. The runic text on some of the pages appear to be obfuscated by layers of encryption that has yet to be decrypted. Of the 74 pages featuring runes, only 19 have been successfully translated.

As 2015 came and went without the launch of a new puzzle, many came to suspect the Liber Primus had to be completed if Cicada was to return. This was more or less confirmed at the beginning of 2016 when Cicada encouraged a re-examination of the book. Years have gone by now with minimal progress and best complete silence from Cicada. 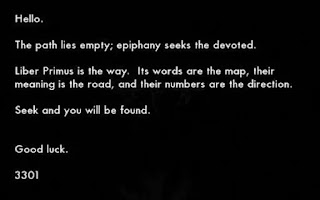 Questions raised by the original image have gone ignored. What’s the purpose of these puzzles ? Who’s behind them ? What happens when you reach the end ?

In a 2015 Interview with Rolling Stone magazine, two alleged winners of the first puzzle chronicled the events beyond the final stage. After receiving an email from Cicada they were taken to a forum on the dark web. Here, they could communicate with some twenty recruits as well as a handful of established members of Cicada. They were told that Cicada 3301 had been founded by a group of friends who shared common ideals about security, privacy, and censorship. The goal was to work as a collective to develop software applications in line with that ideology As friends recruited friends, this society quickly expanded into a decentralized international organization. The recruits were than tasked with developing a software that fit the ideology of the group and members of Cicada would oversee their progress. But without the allure of a puzzle to be solved, the recruits quickly lost interest. By the end of 2012 all but one had left and a few months later the site was gone. They never heard from Cicada again.

Cicada made their last public statement in April of 2017, merely warning against disinformation, but the current state of the third puzzle and the possibility of a fourth remains clouded in mystery.